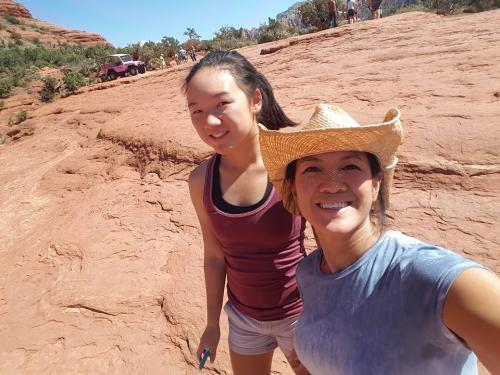 Hi there, my name is Kay Blackburn.  I am 45 years old and was extremely active when I was diagnosed with Non-Hodgkins Lymphoma.  My life’s passion (outside of raising my three girls) had been about health and wellness and my daily routine included the gym and trying new ways to get our three daughters to incorporate healthy foods into their diet. Yes, I am that weird mom that provided carrots and apples for school snacks and baked homemade granola instead of buying it from the store because it has too much sugar in it.  I spent so much of my energy on being healthy, that you could probably imagine my shock when I learned that I had a large mass the size of an eggplant in my abdomen as well as others in my chest, and under my right arm on Halloween 2016.  My normal life hasn’t been the same since.

I started chemotherapy/immunotherapy treatment within 2 weeks in Tucson (where we live) for Non-Hodgkins Follicular Lymphoma.  I was told if you were to have cancer, this was the one to have because it is indolent (slow-growing) and very treatable.  I considered myself relatively young and in good shape, so I was ready to fight the good fight.  My treatment plan was 6 months of Rituximab/Bendamustine, given over 2 days every 4 weeks for 6 cycles.  I started in November and went through 5 cycles.  After the 3rd round,  my doctor ordered a CT Scan with Contrast which showed that the tumor under my arm was essentially gone as well as the ones in my chest, but the large mass was only shrunk by about 25% and there was another that showed very little change.  At that point, we continued another 2 cycles,  and at my appointments I kept questioning what we were expecting.

At my meeting with my oncologist the day of my 5th round, my persistent questioning finally convinced him to order a PET scan the week before my 6th and “final” round of treatment in order to make sure we were tracking along the right path.   I was crushed when the results came back that in my abdomen the tumors were unchanged in size or slightly larger and more hypermetabolic (active/aggressive) than they were in the original PET scan I had in November.  It was most disconcerting that my doctor was almost panicked and had a “deer in the headlights” look.  It is a frightening thing to be in front of an expert, who is caught off guard and not sure what to say.

I had fortunately planned ahead to meet with my doctor at the Mayo Clinic in Phoenix (whom I had originally consulted in November for a second opinion) just two days later.  When we met with her, she suspected that my non-aggressive lymphoma had transformed into an aggressive Diffuse Large B Cell lymphoma.  DLBCL is very treatable with a standard protocol called R-CHOP.  She had explained to us that about 10% of cases of follicular lymphoma transform in our original meeting with her, but at the time she agreed to the treatment plan that was laid out for me and so we had decided to stay in Tucson for treatment.

She ordered a biopsy for me to be done at Mayo the following week and mentioned that in some cases of transformed lymphoma , you get a rare gene mutation which they call Double Hit Lymphoma.  This sub-type is even more aggressive and involves the rearrangements of two genes, MYC and BCL-2.  In layman’s terms it’s like the accelerator is floored and the brakes are broken on the cancer cells… not good.  It is fairly new in terms of diagnoses and research (within the last few years) and therefore hard to find a lot of people out there who have had it, much less survived from it.